Is Mississippi on solid fiscal footing for the future as the Republican leadership of both houses of the Mississippi Legislature take slightly different paths in their march toward a massive tax cut?

As in most matters of politics and public policy, the answer to that question depends on who is providing the answer. The Mississippi State Senate and the State House of Representatives have offered competing plans to accomplish a large (the House says they are offering the largest single tax cut in state history) and enduring tax reduction.

The Senate plan offers a recurring tax reduction of $316.6 million by 2026 and a one-time tax rebate of $130 million for a total of $446.6 million, according to preliminary estimates provided by the Legislative Budget Office and Mississippi Department of Revenue. The plan greatly reduces, but does not fully eliminate, the state income tax.

The House plan would provide a 50 percent car tag tax credit for the total cost of the tag. The Senate plan would eliminate the state car tag fee, which represents between $12.75 and $14 in savings per tag.

Pro-tax cut voices from the political right like Douglas Carswell of the Mississippi Center for Public Policy greeted the competing tax cut proposals with praise: “We welcome the proposals outlined in the Senate today to cut taxes in Mississippi. Reducing grocery taxes from 7 percent to 5 percent, a one-off tax rebate and the elimination of the 4 percent income tax bracket over four years would help local families. With two different tax reduction plans now being proposed, one from the House and the other from the Senate, it is important that we find common ground. Unless there is some meeting of minds, neither plan will happen.”

The National Federation of Independent Business, while clearly favoring the House version, also praised legislative efforts to curtail or eliminate the state income tax: “Eliminating the individual income tax would have a big impact on Mississippi’s small businesses because many small businesses in the state are organized as pass-through entities and pay taxes at the individual rate.

“Eliminating the individual income tax would free up funds that owners could use to add jobs, increase wages, and expand their businesses.”

But other voices, like the left-leaning Washington-based Institute on Taxation and Economic Policy, panned both proposals as ignoring the source of the state’s budget surplus as primarily one-time federal funds and as policy that helped the wealthy at the expense of lower income citizens. ITEP state policy analyst Kamolika Das wrote:

“An egregious example of short-sighted tax-cut fervor happened last week in Mississippi. The House passed a bill that would gradually eliminate the state income tax, increase the general sales tax by 1.5 percent, reduce the sales tax on groceries from 7 percent to 4 percent, and cut the car tag tax. Altogether, the proposal would cost the state more than $1.5 billion in revenue and lavish most of the benefits on the wealthiest residents.

“House leadership has tried to frame the proposal as a benefit for low- and middle-income residents because it includes a grocery tax cut, but when taken together, the bill increases taxes for the state’s lowest earners and seniors on fixed incomes while saving wealthy households thousands of dollars.

“Not only is the proposal deeply inequitable, but Mississippi also simply cannot afford it. Lawmakers are nonsensically trying to use a one-time surplus (thanks to federal aid that was intended to help low-income communities weather the pandemic) to make long-term, structural tax changes that will perpetually widen the economic gulf,” Das concluded.

The GOP super majorities in both houses of the Legislature line up for the tax cut to pass in some form. But this issue will produce an important and closely watched conference committee process. 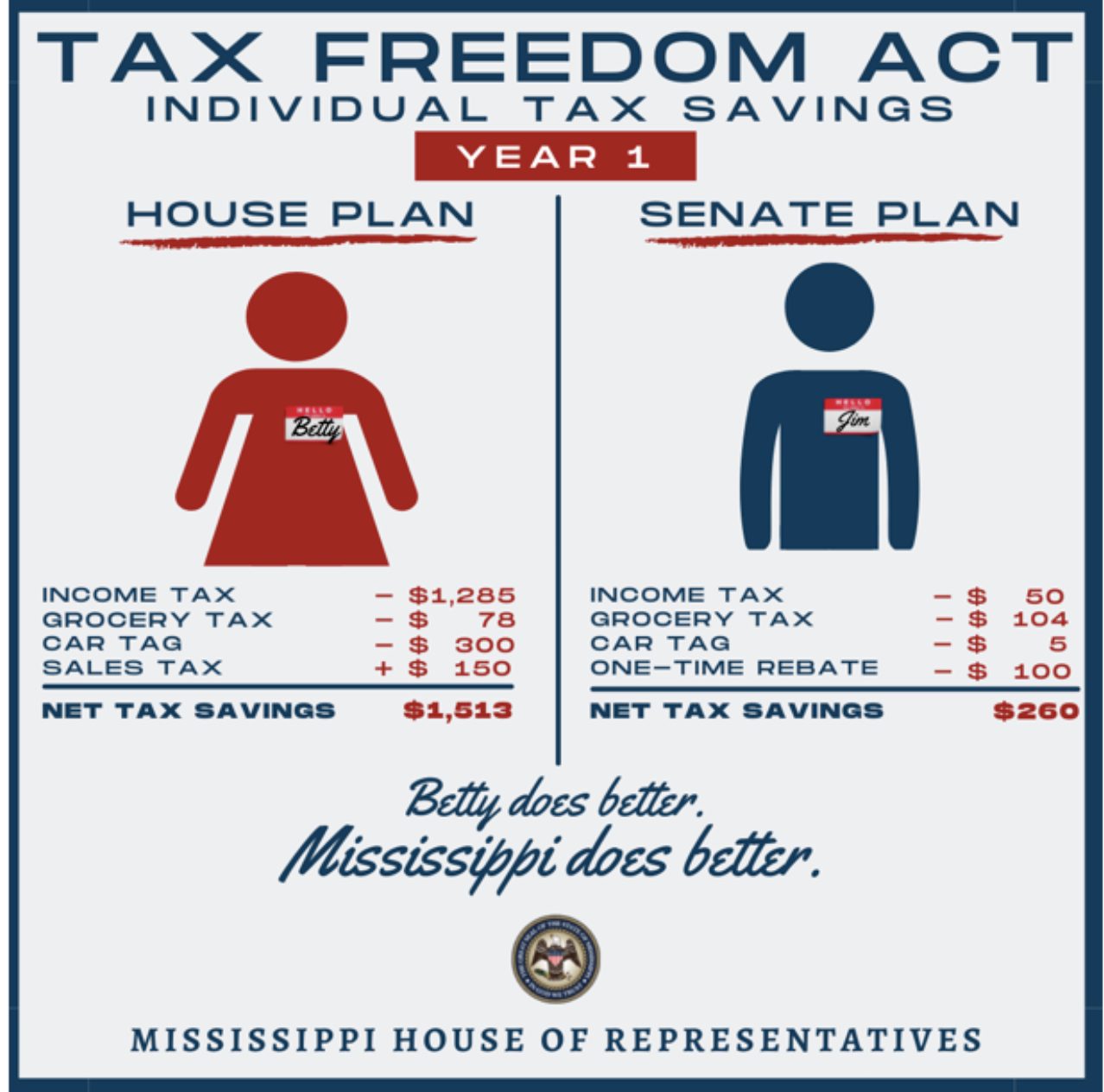