“Financial service providers wield immense power and should not be able to block constitutionally-protected businesses or industries to please political activists,” Wicker said. “Attempts to cut off law-abiding organizations like energy producers or firearm manufacturers from our economy are an affront to the rights of all Americans.”

“Banks, credit unions, and financial service providers are not above the law, and have no legal standing to refuse law-abiding businesses service, especially for political reasons,” Hyde-Smith said.  “This important legislation would ensure banking institutions operate on an impartial basis, and establishes penalties for those that put political agendas over the law.”

The purpose of the Fair Access to Banking Act is to protect fair access to financial services and to ensure banks operate in a safe and sound manner, basing judgements and decisions on impartial, individualized risk-based analysis developed through empirical data and evaluated under quantifiable standards.

If enacted, this bill would:

Currently, some of the largest United States banks are using their economic standing to discriminate against energy producers. Last year, five of the country’s largest banks announced they would not provide loans or credit to support oil and gas drilling in the Arctic National Wildlife Refuge even though Congress explicitly authorized it. In the fall, JP Morgan Chase declared it would refuse financial services to coal producers, and Bank of America began a politically-motivated effort to achieve net-zero greenhouse gas emissions from its financing activities by 2050, an effort directly targeting producers of reliable American energy.

Discrimination by financial service providers also extends to industries protected by the Second Amendment, with banks like Capital One including “ammunitions, firearms, or firearm parts” in their prohibited payments section, and payment services like Apple Pay and PayPal denying their services for transactions involving firearms or ammunition.

This legislation builds off the Trump Administration’s Fair Access Rule, which was issued in response to these developments to prevent these examples and other acts of discrimination.  However, the rule’s implementation has since been paused under President Biden. 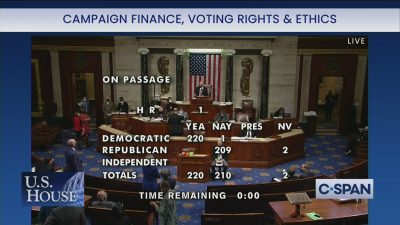