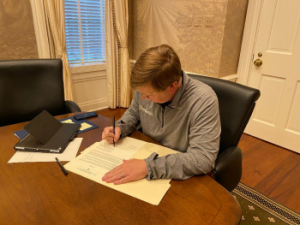 Tuesday, Mississippi Governor Tate Reeves announced that he was rolling back the executive orders regarding mask wearing and business restrictions, saying, “The governor’s office is getting out of the business of telling people what they can and cannot do.”

Reeves noted that hospitalizations have “plummeted” and COVID case numbers have fallen dramatically, to the point where no county meets the original criteria for a mask mandate.

While the move was celebrated by many Mississippians across social media, the Mississippi Legislative Black Caucus, Congressman Bennie Thompson (D – MS-02), and the White House have all spoken out to encourage citizens to continue wearing masks even as the order is lifted.

The Mississippi Legislative Black Caucus held a press conference on Wednesday on the steps of the Capitol to encourage Mississippians to continue wearing their masks despite Governor Reeves’ announcement.

“We’re trying to rely on the science, and that’s what we want all Mississippians to do,” Sen. Angela Turner Ford (D) said at the MLBC presser.  “Although our cases have decreased, statistics show only 7.6% of our state have been vaccinated.”

Congressman Thomas questioned the timing of the Governor, tweeting that he was siding with Dr. Anthony Fauci and urging Mississippians to wear a mask nonetheless.

“Gov. Tate Reeves wants to lift the mask mandate and open businesses,” Thompson tweeted.  “I believe Dr. Fauci’s recommendations that it’s too early for these actions. I strongly encourage all Mississippians to continue to wear their masks and listen to the experts.”

Gov. @tatereeves wants to lift the mask mandate and open businesses. I believe Dr. Fauci’s recommendations that it’s too early for these actions. I strongly encourage all Mississippians to continue to wear their masks and listen to the experts. #COVID

White House Press Secretary Jen Psaki was asked about the announcement of the rollback of orders by the Mississippi Governor as well as Texas Governor Greg Abbott in her Wednesday briefing. The Texas Governor took similar action to Reeves on Tuesday.

Psaki said President Joe Biden continues to believe that mask wearing can save lives and it is why he has asked all Americans to wear masks for the first 100 days of his Administration.

“For nearly a year, we’ve been dealing and navigating and coping with this pandemic across the country, and this entire country has paid the price for political leaders who ignored the science when it comes to the pandemic,” Psaki said.  “He [President Biden] believes that, and he’s hopeful that people in these states will continue to follow the guidelines that have been set out and the recommendations made by health and medical experts.”

Psaki was asked if President Biden would be contacting the Governors of Mississippi and Texas to ask them to reconsider their decision. She said the President’s view of mask wearing is well known and that Biden speaks with Governors of both parties often, saying she was sure the President would raise this the next time they speak.

Mississippi Governor Reeves said cities are within their authority to continue to order mask wearing in their communities should local officials see the need. Some mayors have chosen to do just that, including the cities of Jackson, Vicksburg and Hattiesburg.  Others, like the mayor of Tupelo, have said that his city will not enact orders other than what Governor Reeves has issued, meaning there will not be a mask mandate in the city.

Even as he announced the easing of restrictions, Governor Reeves did encourage Mississippians to wear a mask and practice social distancing, taking personal responsibility rather than being ordered to do so.  He also noted that K-12 schools are still required to wear a mask where social distancing is not possible and he maintained certain capacity limits on K-12 extracurricular activities at outdoor and indoor venues.

President Biden said allowing Mississippians to decide how to protect themselves is “neanderthal thinking.”

Mississippians don’t need handlers. As numbers drop, they can assess their choices and listen to experts. I guess I just think we should trust Americans, not insult them. 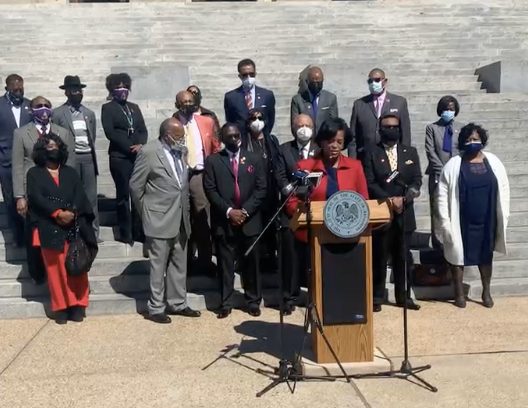