LIPSON: Beware of Government Overreach to Protect Our Health

When two important goals conflict, sensible people try to strike a sensible balance. This sense of proportion and mutual forbearance is central to living peacefully in a liberal society like ours.

It is important to remember these values as we deal with the COVID-19 pandemic. The most striking aspect of the American public’s response has been the extensive, purely voluntary compliance with city, state, and local guidelines and orders. That phrase “purely voluntary” is crucial. Some of the guidelines have hardened into legal mandates, but even in those cases people have cooperated willingly because they want to do the right thing, both for themselves and for their community.

What about cases where voluntary compliance breaks down, where people don’t follow the guidelines or even the laws? If personal values and social pressures don’t work, the authorities have to step in. But their first step should be a warning, unless a violations are malicious or pose serious danger. If finger wagging at lessor violations fails, the next step should be a fine or sometimes even jail. But punishment should be a last resort.

Balancing the right to assemble with public safety

How does this approach apply to large gatherings? The right to free assembly is protected under the First Amendment. In fact, free speech gains its political clout from the right to assemble freely and contest elections openly. But this right to assemble doesn’t mean groups can congregate anytime, anywhere, under any circumstances. Gatherings can be suspended, properly and legally, in emergencies like this one. During a pandemic, it makes perfect sense to stop hordes of college students from gathering in bars and on beaches during spring break because they pose a danger to themselves and others.

The same logic holds for large, in-person services in church, even though religious freedom is among our most zealously guarded rights. It is perfectly reasonable (and perfectly legal) to ban large meetings in churches, synagogues, and mosques, at least temporarily. Although practicing religion in your own way is a constitutional right, it comes with some limits, just as the right to speak freely does. Freedom of speech doesn’t guarantee your right to use a bullhorn at 2 a.m. outside an apartment building. Such limits are called “time, place, and manner” restrictions. They apply to freedom of assembly, including religious assemblies, during health emergencies.

Banning large gatherings does not mean banning collective worship. That really would violate basic rights if the worship could be done safely. In this case, it certainly can since services don’t have to be held in large groups that meet in person. They can be streamed, for instance, as the pope did for Easter Mass. So can extended-family gatherings for religious holidays, such as Passover.

The joke going around Jewish households this year reflected the problems of celebrating online. The Passover Seder is always structured around the “Four Questions,” beginning with “Why is this night different from all other nights?” This year, friends said, the four questions were:

What about meeting clergy and fellow congregants for religious services? A safe way to do that is to hold drive-in services, with participants staying in their own cars. That approach reconciles the otherwise thorny tradeoff between religious rights and public health. A no-brainer, you’d think.

Alas, some public officials also fit that description: no brains. One of them, the mayor of Greenville, Mississippi, decided to slap a $500 fine on everyone who attended drive-in church services last week, even though they stayed in their cars and endangered no one. Mayor Errick Simmons’ reasoning is that Mississippi has a “shelter-in-place” order, and these people didn’t shelter at home. But even if worshippers technically violated the order, theirs was a harmless violation, coming when they longed for spiritual support. The mayor should remember the wise practice of basketball referees, “No harm, no foul.”

Since everything in America ends up in court sooner or later, as Tocqueville said 200 years ago, the tickets are now being challenged by a public-interest law firm. The same thing happened when the mayor of Louisville, Kentucky, banned drive-in services. A federal judge promptly overruled that ban. Whatever the courts decide, these episodes should teach us a few larger lessons about dealing with emergencies like this.

First, it is crucial to encourage voluntary compliance. Thankfully, that’s how nearly all Americans have responded to the COVID-19 pandemic. The key is to promote and sustain that voluntarism. The best way to do that is through reasonable rules, thoughtful discussion, and intelligent enforcement. That doesn’t always mean “forgive and forget.” The public deserves protection from criminals who use the pandemic to phish for credit cards, sell defective goods, or commit outright fraud. It means no tolerance for the malevolent morons who deliberately cough on groceries. But it also means a light hand for most people, who try to do the right thing but don’t always succeed. Government diktats and rigid enforcement pit these ordinary citizens against public officials and police. That confrontation is unnecessary, and it undermines the trust needed for voluntary compliance.

Second, mutual respect is essential for us to live together peacefully in a diverse society. That means recognizing that people have different preferences and values, including their most deeply held beliefs. And that means governing authorities and their constituents ought to search for solutions that “make everyone whole.” That’s not always possible, but it’s always worth searching for. Don’t assume the only solution is “I win, you lose.” Maybe we can both win, or come close. In the case of religious freedom and public health, it should be easy. Those values can be reconciled with a few prudent, temporary restrictions, which already have widespread support.

Mutual respect also means valuing each individual’s autonomy and the private, voluntary organizations they form, including religious institutions. A vibrant civil society, filled with those organizations, is one of America’s great achievements. Don’t mindlessly break it with coercion, intrusion, and an engorged state sector, which crowds out private efforts.

Respect for individual autonomy and restraints on state power are the heart of Americans’ civil liberties. That’s why it’s a terrible idea to track all movements of infected people, as some public health authorities have suggested. It’s one thing to track people the courts have confined to their homes. That’s why we use ankle bracelets. It’s another thing entirely to track vast numbers of people, most of them law-abiding, to identify a few miscreants. You expect to see that Big Brother lurking in Beijing, not in Boston or Biloxi.

Third, Mississippi’s order to “shelter-in-place” illustrates a common problem with laws and regulations. They are blunt instruments, often riddled with mistakes, omissions, and unexpected effects. One size doesn’t fit all, or at least it doesn’t fit well without alterations and a lot of elastic. One obvious way to make these rules work, aside from flexible enforcement, is to modify them swiftly when problems arise. If an initial rule bans all restaurants from operating, for instance, it would mistakenly ban drive-through window and take-out service. That error might be inadvertent and easily remedied after it was noticed. Or it could be deliberate, but worth changing after problems emerge. Those remedies are what Mississippi should undertake. Either drop the enforcement or, better yet, change the rule to exclude drive-in services.

Remember: America is working through this pandemic with lots of voluntary compliance, selfless cooperation, and unprompted generosity. That public spirit deserves praise and encouragement. Don’t crush it with overreaching rules, draconian penalties, and intrusive surveillance. Those clumsy, coercive measures come at a price. They undermine our liberties, and they don’t make us any safer.

Charles Lipson is the Peter B. Ritzma Professor of Political Science Emeritus at the University of Chicago, where he founded the Program on International Politics, Economics, and Security. He can be reached at charles.lipson@gmail.com. 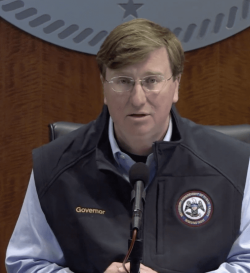