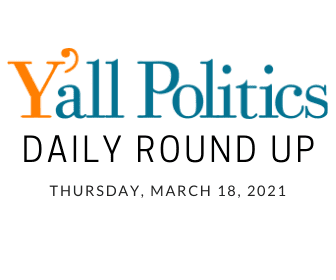 This data from the U.S. Census Bureau was presented by Visual Capitalist in February in an article entitled “Visualizing America’s Entrepreneurial Spirit During COVID-19.”

“Despite the risks of opening a business during a global pandemic, new data from the U.S. Census Bureau reveals that the entrepreneurial spirit is alive and well in the United States,” Visual Capitalist’s Avery Koop wrote.

Today MSDH is reporting 352 more cases of COVID-19 in Mississippi, 7 deaths, and 43 ongoing outbreaks in long-term care facilities. The total of #covid19 cases for the year is now 301,602, with 6,936 deaths. Case details and prevention guidance at https://t.co/YCv9xPyJDk pic.twitter.com/nJUOKH4sHo

Chairman of Finance, Senator Josh Harkins, sat down to discuss the reasons behind why the Senate did not move forward with HB 1439, the Mississippi Tax Freedom Act.

The Internal Revenue Service is delaying the annual tax filing deadline for a second straight year, according to the U.S. House Ways and Means Committee.  No official release has yet been issued by the IRS.

…This change in the federal filing deadline by the IRS does not mean Mississippians will get a similar reprieve from filing their state taxes.  States set their own filing deadlines and Mississippi’s is still April 15th as of this reporting.

The American Society of Civil Engineers released a video project entitled “American Infrastructure: The Long Haul” highlighting the progress Mississippi has made with its bridges and infrastructure repairs. It advocates for increased funding in Congress for surface transportation improvements nationwide.

“With this bill, Congress again defies the Constitution in an effort to strip states of their basic right to provide for our citizens’ welfare,” said Attorney General Lynn Fitch. “My colleagues and I make clear with this letter: we will do what we need to do to limit Washington to powers prescribed by the Constitution, and defend against federal overreach.”

Certain provisions of the Act forbid states from using COVID-19 relief funds to “directly or indirectly offset a reduction in…net tax revenues” resulting from state laws or regulations that reduce tax burdens, whether by cutting rates or by giving rebates, deductions, credits, “or otherwise.”

U.S. Senator Cindy Hyde-Smith (R-Miss.) today provided testimony on the harmful effects on girls and women that would result from provisions of the Equality Act (HR.5), a House-passed measure that would significantly alter how the United States addresses gender identity.

In testimony at a Senate Judiciary Committee hearing Wednesday, Hyde-Smith focused her comments on the effect the legislation would have on women’s athletics and progress made by women since the passage of Title IX in 1972.

Wicker and Hyde-Smith are among 40 Republican Senators who signed a letter to Government Accountability Office (GAO) Comptroller Gene L. Dodaro that seeks affirmation of the Biden administration’s violation of the Impoundment Control Act.

“On January 20th, in one of the first official acts of his presidency, Joseph Biden suspended border wall construction and ordered a freeze of funds provided by Congress for that purpose,” the Senators wrote.

“It is impossible for this gesture to render adequate thanks to Colonel Harris for the years of suffering he endured on behalf of our nation,” the senators wrote. “However, this post office designation would duly recognize him as an American hero worthy of emulation. We urge swift passage of this bill.”

Zack Grady launched his bid for Ward 3 councilman last year in December but was told days before the qualifying deadline that he would be unable to run due to an opinion released from Attorney General Lynn Fitch.

A Circuit Court judge ruled Wednesday that Grady would be able to run, meaning he faces Craig “Boots” Diaz for the Ward 3 seat on D’Iberville’s City Council.

The judge also ruled that the D’Iberville Municipal Republican Executive Committee and the City Clerk must immediately place Grady’s name on the ballot.