Skip to content
Home
>
News
>
Wicker Pushes for Accountability in... 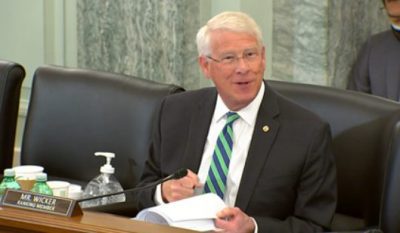 U.S. Senator Roger Wicker, R-Miss., ranking member of the Senate Commerce, Science, and Transportation Committee, attended a hearing to consider recent progress in distributing billions of dollars in federal support to expand broadband connectivity. Wicker has been a champion for legislative efforts to increase the accuracy of internet service coverage maps to ensure federal dollars are not wasted and go toward assisting unserved residents.

In his remarks to the committee, Wicker highlighted the billions of dollars of additional federal aid provided by last year’s bipartisan COVID relief packages to support internet connectivity, as well as the strong performance of U.S. broadband networks, which, according to some estimates, saw a 51 percent increase in traffic last year.

“The good news is that broadband networks in the United States performed well compared to other nations,” Wicker said. “Thanks in part to a light-touch regulatory framework that promotes investment in broadband infrastructure, U.S. broadband networks have been able to accommodate the sustained surge in online traffic and bandwidth consumption during the pandemic.”

Wicker also pointed to the success of existing federal broadband programs, including the Rural Digital Opportunity Fund (RDOF), which distributed $9.2 billion for broadband expansion across the nation – including $495 million for Mississippi. Last year, Wicker introduced legislation to create additional incentives for providers to complete their RDOF buildouts earlier and worked with the Federal Communications Commission (FCC) to expedite their award of broadband support to help Americans get online during the coronavirus pandemic.

However, he urged that the allocated funds be used prudently, avoiding wasteful spending through accurate mapping of where service is available to residents and where it is not. Next week will mark one year since the passage of Wicker’s Broadband DATA Act, which requires the FCC to update how it creates service maps.

In his questions to the witnesses, Wicker expressed his disappointment at the FCC’s projection that it would take another year to finish implementing the provisions of the law.

“It is absolutely critical [to expedite the timeframe] because it is holding us up,” Wicker said. “This is not a partisan issue, we just need to figure out what we can do…to move this along.”

He asked former FCC Commissioner Mike O’Rielly about the delay.

“This should be one of the commission’s highest priorities,” O’Rielly answered.