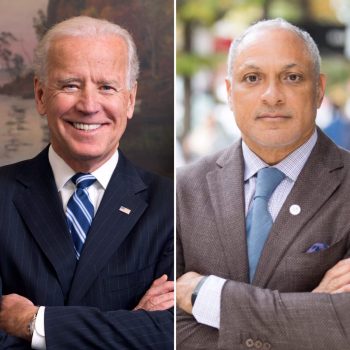 With Democrats coalescing around Joe Biden as their best chance to defeat President Donald Trump in November, there is a lingering sexual harassment allegation made by a former staffer that Biden’s supporters, the mainstream media, and Mississippi U.S. Senate candidate Mike Espy are desperately trying to avoid and dismiss.

Flashback to the fall of 2018 when the nation looked on as the U.S. Senate held hearings to consider the President’s nomination of Brett Kavanaugh to the Supreme Court.  The hearings became focused on uncorroborated sexual abuse accusations by Christine Blasey Ford, with the #MeToo movement jumping headlong into the fray about Kavanaugh’s alleged actions as a high school student.

Former Vice President Biden was asked about the Kavanaugh hearings and Ford’s allegations in September 2018, saying when a woman alleges a sexual assault she should be presumed as telling the truth.

“For a woman to come forward in the glaring lights of focus, nationally, you’ve got to start off with the presumption that at least the essence of what she’s talking about is real, whether or not she forgets facts, whether or not it’s been made worse or better over time,” Biden said, as reported by the Washington Post.

Days later, at a press conference where former Massachusetts Governor Deval Patrick was endorsing his candidacy for the U.S. Senate in a special election to replace Thad Cochran, Mississippi Democrat Mike Espy went on the record to address Ford’s allegations.

“I think the allegation (against Kavanaugh) is credible. This is a lifetime appointment to the highest court in the land. I think we can wait a little longer for a credible investigation,” Espy said, echoing the left’s calls for more investigations into Kavanaugh and further prolonging the hearings in an attempt to stall or kill his eventual confirmation.

The “non-partisan” Mississippi Today used an entire article to attempt to debunk McDaniel’s claim that such allegations “99 percent of the time are just absolutely fabricated.”

“Although an Internet search can turn up anecdotes of women recanting rape and sexual assault allegations, our reporters were unable to find a single study that backed up this claim but found several that proved the vast majority of rape accusations are true,” Larrison Campbell wrote for Mississippi Today before going on to quote the Journal of Forensic Psychology, Department of Justice data, and the National Sexual Violence Resource Center, among others.

“Most women are sexually assaulted by someone they know,” Campbell wrote, citing the NSVRC’s Info and Stats for Journalists.  “Eight in 10 victims of sexual assault report knowing their attacker.”

Yet now, when Biden accuser, Tara Reade, comes forward, there is a deafening silence by these same voices.

Reade is a former aide to then-Senator Biden.  She alleges the Democratic Presidential nominee assaulted her in a Senate building.  She detailed the account in a podcast interview in March 2020.

Biden’s campaign has called the accusations false.  The New York Times has come to Biden’s defense to challenge Reade’s claims, and has since gone in to overdrive to help absolve Biden and defend their duplicity.

Reade has filed a report with police in Washington, D.C., claiming she was the victim of a sexual assault in 1993.

Once again a candidate for the U.S. Senate, Democrat Mike Espy has endorsed Joe Biden for President.  He did so in March 2020, almost a year after Reade came forward with her accusations against the former Vice President.

I am endorsing @JoeBiden for President. We need a leader who unites, heals, and excites us. Someone who not only can win but can also usher in down ballot victories because we need to hold the House and #FlipTheSenate.

Together, I know we can move MS and our country forward.

Espy told Mississippi Today of his endorsement (before Reade’s interview and police report), “It’s almost cliché to say, ‘We know Joe,’ but I really do know him, and I know him to be a man of high competence and integrity.”

Y’all Politics sought Espy for comment on what he thinks of Reade’s accusations of Biden, giving him a similar chance to offer perspective as he did in 2018 regarding Ford’s claims against Justice Kavanaugh.  Espy was asked whether or not he finds Reade’s allegations credible, as he labeled Ford’s, and whether or not this causes him to rethink his endorsement of the presumptive Democratic Party Presidential nominee.

Despite multiple attempts, Espy’s campaign did not respond.

Espy’s camp did have time, however, to double down on their endorsement of Biden even as these questions lingered on Reade’s accusations, sharing former President Barack Obama’s video endorsement of the Democrat and saying, “Joe Biden is a strong leader who unites and heals.”

.@JoeBiden is a strong leader who unites and heals. Together, we can move our country forward, hold the House, and flip the Senate in November. https://t.co/9PTp6xjKRE

No mention of Reade’s allegations of Biden or comments from Mississippi political candidates/officeholders on said allegations could be found in any other publication of record in Mississippi.

Nonetheless, the hypocrisy shown by the Biden and Espy campaigns, as well as their local and national mainstream media enablers, when comparing the two scenarios are worth noting in terms of bias and political opportunism.

A rush to judgement is encouraged when it benefits their narrative but quickly not worth the ink when it does not.